Happy New Year! Enjoy this Sierpinstree we made for you.

In the week before we left for our Winter Break, the middle school math art classes, my 6th grade class, another teacher’s 4th grade class, and as many other students as I could round up drew and colored 243 Sierpinski Triangles. On the day before the last day of school, we spent two class periods taping them to the floor in the Undercroft (aka basement, where I have my classroom) to make an enormous Sierpinstree (that’s short for Sierpinski Triangle Christmas Tree). The tree is truly huge– it’s over 20 feet tall and about 28 feet wide. It covers the entire floor– though people could (and did) walk around without stepping on it by hopping in the holes. 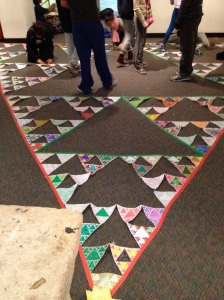 As you might imagine, this was a very large and ambitious undertaking. Drawing that many Sierpinski Triangles is no easy feat. When I suggested the project to my classes, they jumped on it with enthusiasm. But, as you also might imagine, enthusiasm for the project waned once the students were 60 triangles in, with nearly 200 to go, and no end in sight…

I knew that this was going to happen. And, up until the last triangle was taped to the ground, I was fairly certain we weren’t going to finish. I knew that the kids were certainly capable of finishing the project– but would they be motivated enough to do so? Would they be able to keep the awesome goal in mind while slogging through the boring, but important, details? Would I be a good enough leader?

The conflict I had with one student highlights the concerns I had particularly dramatically. It was two days before we were due to assemble the triangle and we still only had about 80 of the 243 completed. Sometime in the beginning of class, this student calls out, “I hate this!” He was referring to drawing and coloring in Sierpinski Triangles. Now, this student is always especially vocal about his feelings and really doesn’t like being told what to do. His aversion to making Sierpinski Triangles was certainly stronger than the distaste felt by his classmates. But, when he refused to make any more triangles– and to help out in any of the other ways I suggested– the tone in the room shifted slightly. People began to complain a little more and cooperate with each other a little less.

I didn’t want to force him, or anyone else, to make Sierpinski Triangles. This project was only going to get done if the kids wanted to do it. Math art isn’t about forcing kids to make things– it’s about giving them space to explore and express their mathematical tastes, and to make things they care about. At the same time, however, as their teacher, I felt responsible for guiding them through the artistic (and mathematical) process. Often when you’re making a piece of art or mathematics, the grunt work isn’t very fun. But you do it anyway because synthesizing the details, putting together the big picture, and enjoying the results are so wonderful. I wanted them to learn to be long-sighted (opposite of short-sighted?) in their mathematical and artistic work, but not to cram it down their throats. This was a tricky balance to strike.

When the day of assembly came around, we had more than enough triangles. Seriously. And the building process was almost entirely organized by the kids. Some continued coloring and touching up unfinished triangles that we needed, others cut them out. Some took on building the bottom of the Sierpinstree, making sure that it actually fit on the floor, while others build the whole top third. They were enthusiastic about the project– and, even better, they cooperated. They were kind to each other, shared ideas and problems respectfully. Not a single person complained about the task they were set. 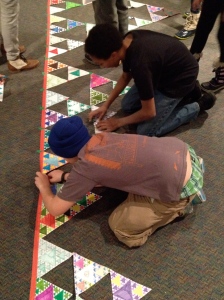 When it came down to it, when it was time for the fun synthesis and big-picture work, everyone wanted to participate and to make the project a success– even the particularly grouchy kid from two days before.

He was more cooperative than I’ve ever seen him. He worked with pride to color triangles and tape them down. He even stayed after class to keep working. When the project was done, he patrolled the perimeter, alternately beaming with pride and glowering at kids who he thought might step on the triangles.

This seemed like a good time for a little chat. I called him over, and was also joined by another student– one of the most agreeable kids I’ve ever met, who loves everything and everyone.

I asked the first kid how he was feeling. Did he have a good time today? “Yes!” he certainly did, and he was really happy with the Sierpinstree. Then I nudged him a little.

“Do you remember what you said the other day? When we were making the triangles in class?”

The first kid looked thoughtful, and then a little sheepish. “I think I might remember that…”

I turned to the second kid. “Did you like making the triangles? Be honest.”

He wouldn’t hurt a fly, and certainly never my feelings, but he was honest: “No, not really. It was okay.”

“But you did it anyway and you didn’t complain.”

“Well, I wanted to make this!” he exclaimed, gesturing to the monstrous triangle on the floor. “Complaining doesn’t make anyone feel any better about drawing all those triangles. But we had to do it.”

I hardly had to say a thing. The first kid looked like he’d never thought about this before. He’ll probably do the same thing all over again later– probably when we’re doing our giant ZOME build in the spring. But at least I”ll have a powerful example (for him, for the other students, and for myself) of a time when we worked hard, cooperated, and made something awesome. 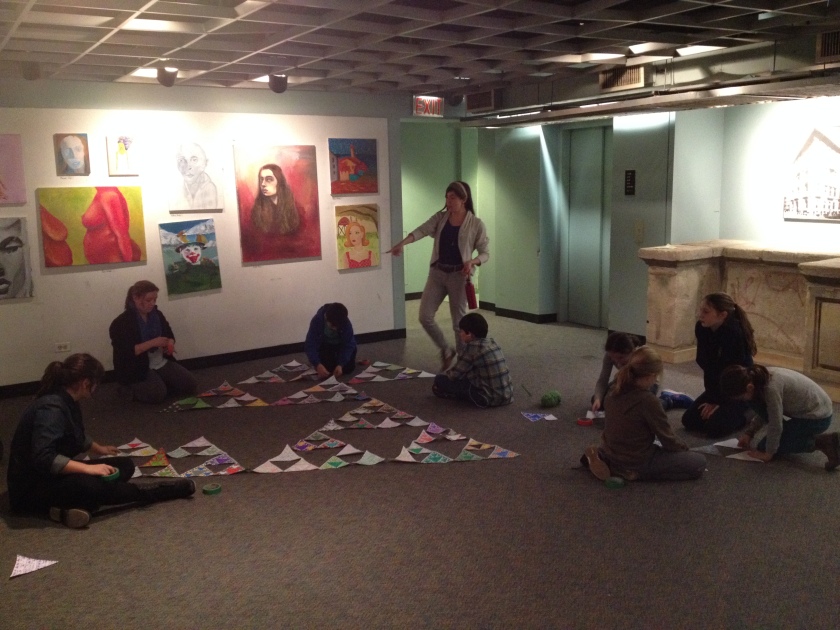